In this third of English Literacy class, I learned how to analyse a song which we can choose the song that related to our theme ( Mental Health) and analyse it into a paragraph. Within this section, I learned how to identify the song lyrics, and elucidate the lyrics into more descriptive sentences. Days and days pass by, I decided to pick one song to analyse for my final assessment called shake it out, sung by Florence Welch.

The song called “Shake it out” has been written down by Paul Epworth, Tom Hull, and Florence Welch. This song is one of the most famous songs that is connected to the mental health issues which sung by Florence Welch or most people called her Florence the Machine. This song is written based on her life, who’s used to get into darkness by the control of alcoholics. When she hangover by alcohol, all of her regrets come to her mind when thinking about her past to her present life. In this song, Florence finds it difficult to forget her memories which she always thinks of it as it was bold. Based on this song, it talks about her past that is filled with bad decisions and her past is truly the darkest point in her life. Her past afflicted with her present-day life, which cannot see a way out of her abysmal and oblique past. This song proposes to any kind of person who stuck their life with their darkness of the remarkable memories in a way to encourage and inspire those people not to think and to not put pressure on their past to their present-day life from their wrong decision that they took and switch it as their experience. Also to embolden those people that, there’s always bloom after wither.

I assume that the main idea of this song is to get rid of these regrets and to stop continuing to think about the mistakes they may have made in the past. The past is over now and to keep these regrets in their head is only going to hold them back. It is difficult to continue living and growing if they keep dreaming of what they wish they could change about the past. The message that this song wants the listeners is to let them shake all of the past to imply that they should have fun and move on rather than dwell into that past. This could tell that the tone of the song is dark, but slowly as the song progresses, the artist becomes more hopeful in what she believes.

To support the tone of the song, Florence chose many good word choices to support the song’s emotion, such as the word “demon” used referring to the bad spirit which compared to the Florence past in a way to convey the listeners more attention and put in their feeling into the song. As the song goes on, the tone starts to change from dark to something hopeful and inspired which is the word “restart”. This word is a good word choice because it persuades people to start their new life as a new piece of paper with a pencil, and don’t think and worry too much about what had happened in the past, because the past cannot be changed, present just be happy, and the future is yet in their power. The word choice changed in the opposite direction because at the beginning of the song, Florence was very sad and conflicted, but throughout the song, she found more courage and forgot about her regrets. She became happier through the process of the song; her happiness started to show and she regrets multiple times that it is hard to dance with them on their back, or hard to find happiness when thinking about the past. In between this chorus she continues to show that happiness is easier to obtain by forgetting regrets.

At the beginning of the song, the middle part of the song, even the end part of the song is every engages the listeners by using figurative language in the song to make the listener curious and use their imagination to think what is happening in the song and what that figurative language means in their perspective. At the beginning of the song, it used “Regrets collect like old friends.” I think this phrase, Florence referring to how regrets may be forgotten about for a little bit but they come back together again and one might find it hard to let them go. This can fill one’s mind with negative thoughts. This phrase contributes to the song because these regrets forming together are what Florence is saying someone needs to “shake out” or forget about, so they’ll be left with no regrets, and therefore a more positive mindset. In the middle part, I think Florence used “It’s always darkest before dawn” wants to compare how the happiest moments will come after tough times, just as dawn doesn’t come until after the sky is dark. Dawn usually symbolizes hope or a positive awakening, although the darkness of the night can symbolize fear or bad situations. The darkness is being connected to tough times. One message that Florence could be giving is that just as darkness has to come every night, we all experience tough times. Although we all have tough times, happier times can come from them, just like how after darkness, dawn returns. This phrase contributes to the message the song gives about forgetting the regrets they’ve had and don’t sink in them because although they may have done something they wish they hadn’t, positive outcomes can come from them, so we shouldn’t regret these memories. Last but not least, Florence used the phrase “Tonight, I’m gonna bury that horse in the ground” wants to compare burying a horse in the ground to forgetting about all the mistakes she’s made. When they bury something, it becomes difficult to get it back. It is still on Earth and still exists, but it is underground and doesn’t conflict or get it the way of anything else above ground. Similar to this, the past and the mistakes one has made are done and have already occurred. One cannot go back in time and change it, because the mistakes one has made are not changeable. Instead of regretting them, forgetting about them can leave them so that they do not continue to affect one’s pursuit of happiness, even though the past still happens and mistakes have occurred. Considering this, when they forget about their mistakes, it is almost as if they are burying them. This phrase strongly contributes to the rest of the song because the idea Florence gives of “shake it out” her regret refers to the meaning of this metaphor.

In conclusion, this song is written based on Florence story, which she had decided on a bad decision which she always regrets about that past, but it never be forgotten in her mind. This song chooses many good word choices to insert with the phrase and figurative language, which is even more persuasive and conveys the listeners not just to regret their past, but also to forget all of the bad things that had happened in the past, bury it underground and never let it vex with their present day. If one can discontinue the desire to alter the past, and instead look forward to the future, happiness will become a more frequent and accessible sentiment.

I hope you enjoy reading these paragraphs, and get some knowledge about how the song has been analysed based on the song lyrics.

Liger Leadership Academy students are English Language Learners. They have been immersed in English for over five years but are still developing grammar and fluency. At Liger, we pride ourselves on prioritizing process over product. Please excuse any English errors as part of the learning continuum our students have taken over the years. 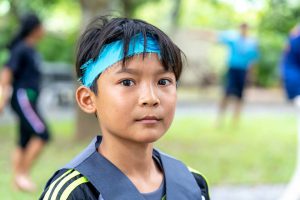